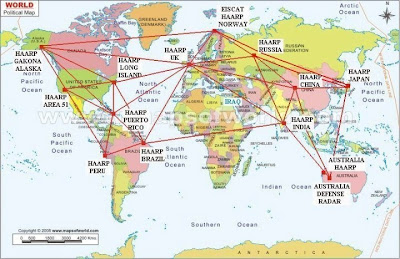 Map and picture taken from www.skyshipsovercashiers.com

A former HAARP insider is interviewed on the site, indicating that HAARP was intended to be a method of warfare, avoiding bullets and bombs, where nations could be eliminated by degrees destroying their agricultural output and their environmental basis of life.

The HAARP war is now ongoing worldwide, gradually destroying the environment in countries all over the world. The worldwide HAARP network however is controlled by one worldwide government, seeking to dramatically reduce the world's population. Earthquakes, volcanoes, droughts and cyclones are all contributing to making the current population of the world unable to survive.

Once the DUMBs (Deep Underground Military Bases) have been knocked out, the 'White Hats', spoken of by Benjamin Fulford, should deploy their forces to destroy the world's HAARP installations, all 14 on the map, before they destroy us.

Gordon Logan believes the world's HAARP capability will be deployed to eliminate the magnetosphere just at the moment the sun is emitting its most powerful flares. This event is predicted for the Spring of 2013. The world's electrical installations will be knocked out apart from those deep underground - in the DUMBs where the elites intend to survive and later emerge unscathed to roam over a planet emptied of humans, apart from the few who can survive on the earth's surface without energy and transportation.

Only a few informed and aware elite rebels are attempting to fight back, and stop the elite's mission to destroy the world's population.

In the meantime nuclear accidents are being allowed to poison vast portions of the globe. Presumably the elites have the technology to clean up the environment once the caesium has done its work. Unless, of course, they have simply gone stark raving mad.

UPDATE - a possible way to survive nuclear contamination, oxygenation from this product.

UPDATE - A paper sent in by Roy Wright from Australia or New Zealand indicates there is a HAARP facility on Macquarie Island well south of New Zealand and Tasmania. This suggests the above map is not comprehensive, and there could be dozens more locations not mentioned on the main map. 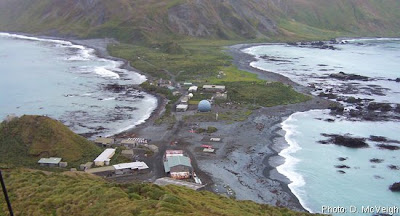 Macquarie Island showing its HAARP facility (from Me in comments)

This is the official description of what's going on HAARP-wise between Australia, New Zealand and Antarctica Interestingly it makes no mention of Macquarie Island, but admits the programme is monitoring the ionosphere and the magnetosphere, and solar activity. How many other undeclared HAARP installations does the world have?

Me in comments asks where is the HAARP facility in the UK. Answer - I don't know yet. I saw this exchange in Parliament in 2002 -

Paul Flynn: To ask the Secretary of State for Defence what assessment has been made of the HAARP programme; and what contribution Britain is making to it. [75022]

Dr. Moonie: The Ministry of Defence is fully aware of the HAARP project. However the MOD has made no specific assessment of the project for defence purposes nor has it contributed towards it.

Which being interpreted means - HAARP is a purely aggressive device, paid for and under the control of the Americans....just as we imagined.

If the White Hats want to take out all HAARP capability, they will have to do a bit of checking around to ensure they've got all the installations listed.